My general research interests are in learning about the origin and evolution of planets. I’m also interested in the ecological system and environment on terrestrial planets. I use a variety of numerical and analytic methods to examine how the surface environment of planets have been produced, evolved, and been stabilized. Then, I wish I compare these theoretical examinations to observations with telescope.

In the case of a theoretical research, if I’m doing what I’m supposed to be doing, this section will forever be under construction…

We explained the origin of the diversity of the Jovian and Saturnian satellite systems by simulating growth and orbital evolution of proto-satellites in an accreting proto-satellite disk model that is combined with the idea of different termination timescales of gas infall between Jupiter and Saturn based on a planet formation model. We calculated the isotopic evolution of Hf-W system in consideration of partial resetting of this chronometer. Our study provided three implications: (1) collision conditions and the number of the giant impact events affect the age estimation of the core formation, (2) the Earth’s W isotope ratio indicates that more than two-tenth of the volume of protoearth’s mantle must be equilibrated at each giant impact, and (3) Mars should have experienced a late extensive equilibration event that involve metal-silicate more than three-tenth volume of Mars’ mantle, which is potentially a single giant impact.

We have conducted an infrared spectroscopy of the Pluto-Charon system in the L band with the adaptive optics system on the Subaru telescope on 2002 May 28. Thanks to the adaptive optics system, we were able to derive the high resolution data of Pluto. The spectra is dominated by the strong and broad absorptions of methane, but include some additional features between 3.05 and 3.9 ?m possibly due to hydrocarbon molecules other than methane. Comparing the observed spectra and simple model calculations by Hapke’s bidirectional model, we considered the effects of some hydrocarbon molecules to the shape of the spectrum of Pluto. We discussed the evolution of components on Pluto through some processes (non-equilibrium condensation, photochemical reaction, cosmic-ray irradiation, hydrodynamic escape, and external reservoir’s addition), and predicted the second major components (HCN, C2H2, C2H6), which was consistent with our observation. 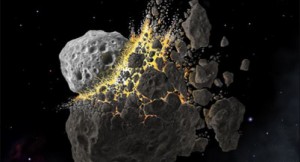 We have conducted a near-infrared (J, H, and K bands) spectroscopy of the brightest asteroid 832 Karin among the Karin cluster group. The spectroscopic observation was performed by the Subaru telescope with the Cooled Infrared Spectrograph and Camera for OHS on 2003 September 14. For different rotational phases of Karin, we derived different spectra such as reddened spectrum like that of S-type asteroid and un-reddened spectrum like that of ordinary chondrite. Karin could be an impact fragment preserving an old surface and is probably one of the cone-shaped fragments at low-velocity impact that formed the Karin cluster group. Our result supports the idea that S-type asteroids are parent bodies of ordinary chondrites.